Happy Post-Christmas!  I think until you're done eating Christmas food, it still counts as the holidays.  Thankfully, I started the pain turn-around yesterday afternoon after my tonsillectomy, so I was able to go out and celebrate with friends and family.  I hope all of you had a great holiday, whatever you celebrate!  I'm sorry I didn't get to my promised posts yesterday, but since Friday, Minnesota has been having major snow - it made for a lovely Christmas, but poor swatching conditions.  At least we have some celebrating left to do for New Year's Eve - the blingy manis are still in season!

Tonight, I have my comparison of the "ruby red" polishes in my collection.  It seems like any reasonably popular nail company these days must have one of these.  You know what I mean: those red jelly polishes packed with red glitter, almost invariably named after Dorothy's ruby red slippers.  I've always wondered that most of these polishes have such similar names, since we all know Ji Baek had to change the name on Rescue Beauty Lounge's Revamp to Black Russian after legal snafu's over that name, but I digress.  (Also, did you know that Dorothy's slippers weren't even originally red?  They were changed from silver for the movie, because Technicolor had just come out and they wanted to show off a more vibrant color!)  I have had Essie in Ruby Slippers forever and as such, never saw the need for the most popular "ruby red", China Glaze in Ruby Pumps.  Then last year, I caved and bought Orly in Star Spangled because it was on super discount at Sally's Beauty Supply and I thought I might want a finer-grade glitter.  So by the time the re-vamped China Glaze Wizard of Ooh Ahz collection came out this winter, my resolve was already low; I decided I needed to have it to complete the collection.  At this point these are the three ruby red's I own, but here are some other's I know of: BB Couture in Cherry Baby, Butter London in Chancer, Color Club in Ruby Slippers, Finger Paints in Pretty Poinsettia, Finger Paints in Red Marzipan, Maybelline in Red Comet, OPI in Crimson Carol, OPI in Dear Santa, OPI in Smitten with Mittens, Pop Beauty in XMas, Precision in Twinkle Toes, Savina in Ruby, Savvy in Ruby Slippers, Zoya in Delilah, and Zoya in Jade.  That's only polishes in a true red jelly base with red glitter - I allowed different sizes as well as those that include some gold glitter because Essie in Ruby Slippers has a gold glitter look at times. Most of these polishes are still available. 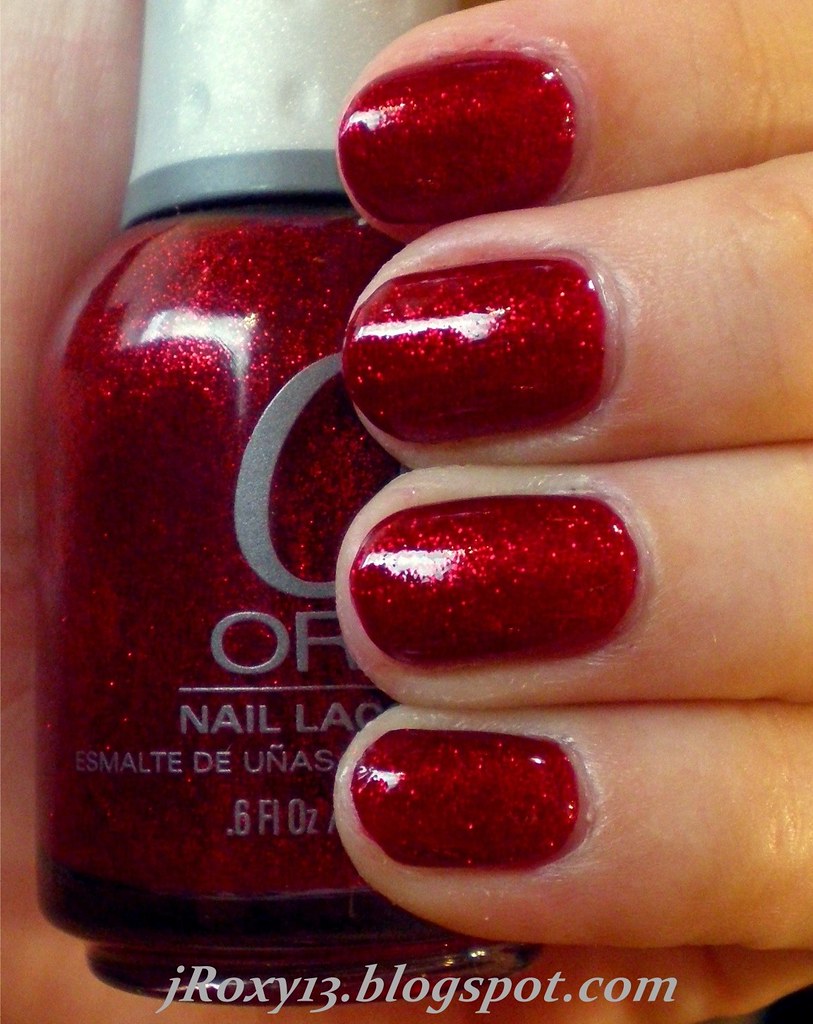 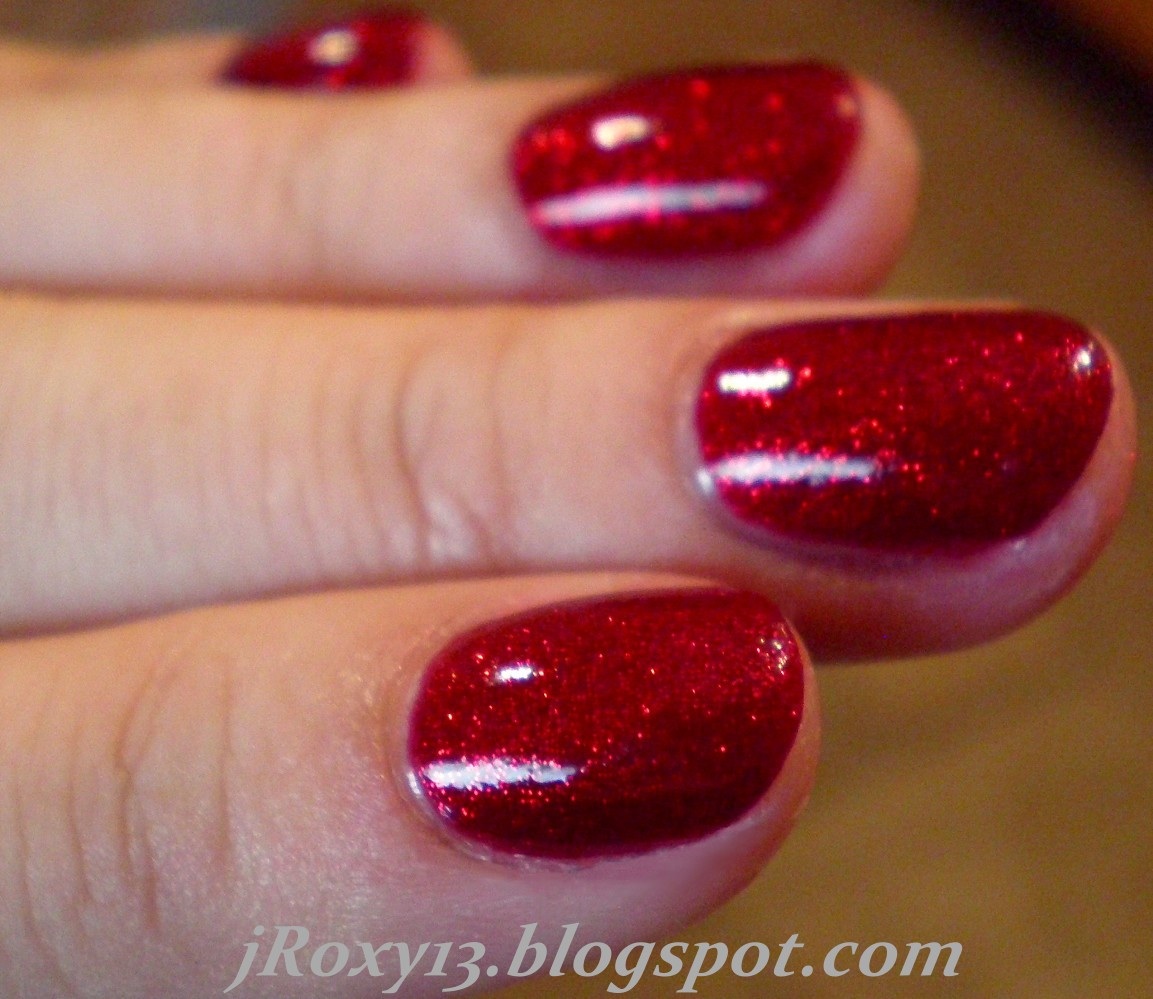 Orly in Star Spangled from Summer 2009 "Stars and Stripes" collection

Orly in Star Spangled came out this summer, along with two repromotes (Star of Bombay and White Out), to celebrate Independence Day.  Now, I am all about a theme mani, plus my birthday is July 2, plus one can never have too many reds, plus GLITTER, plus it was on sale for an insanely cheap price.  Donc, I had to buy it - it's not a compulsive sickness, it was clearly necessary, all right?  This is three coats, indoors in indirect light (it's not often we're going to have sunny days while it's winter here in Minnesota)  - it only needs two coats for opacity, but three gives it more depth.  Application is typical of a jelly glitter, it's not hard to apply, but it does have a slight tendency to pool at the tips.  I was perfectly happy with this ruby red, but every season on the NB, China Glaze in Ruby Pumps continues to be ranked in the Top 20, so I figured there must be something special to it, right? 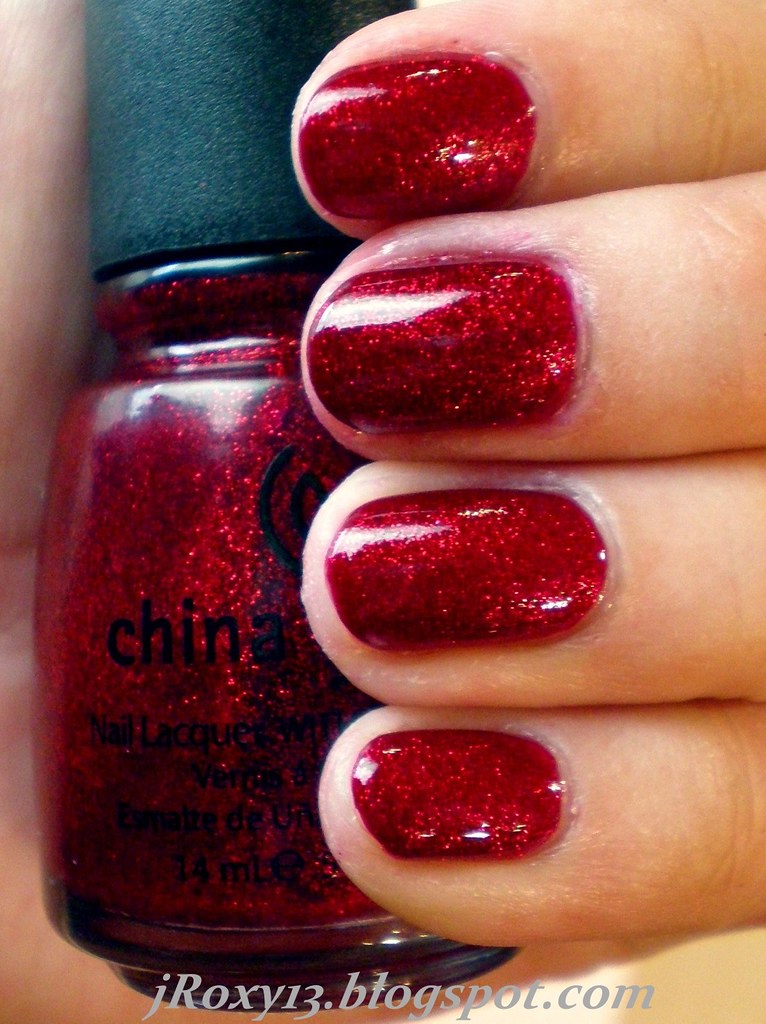 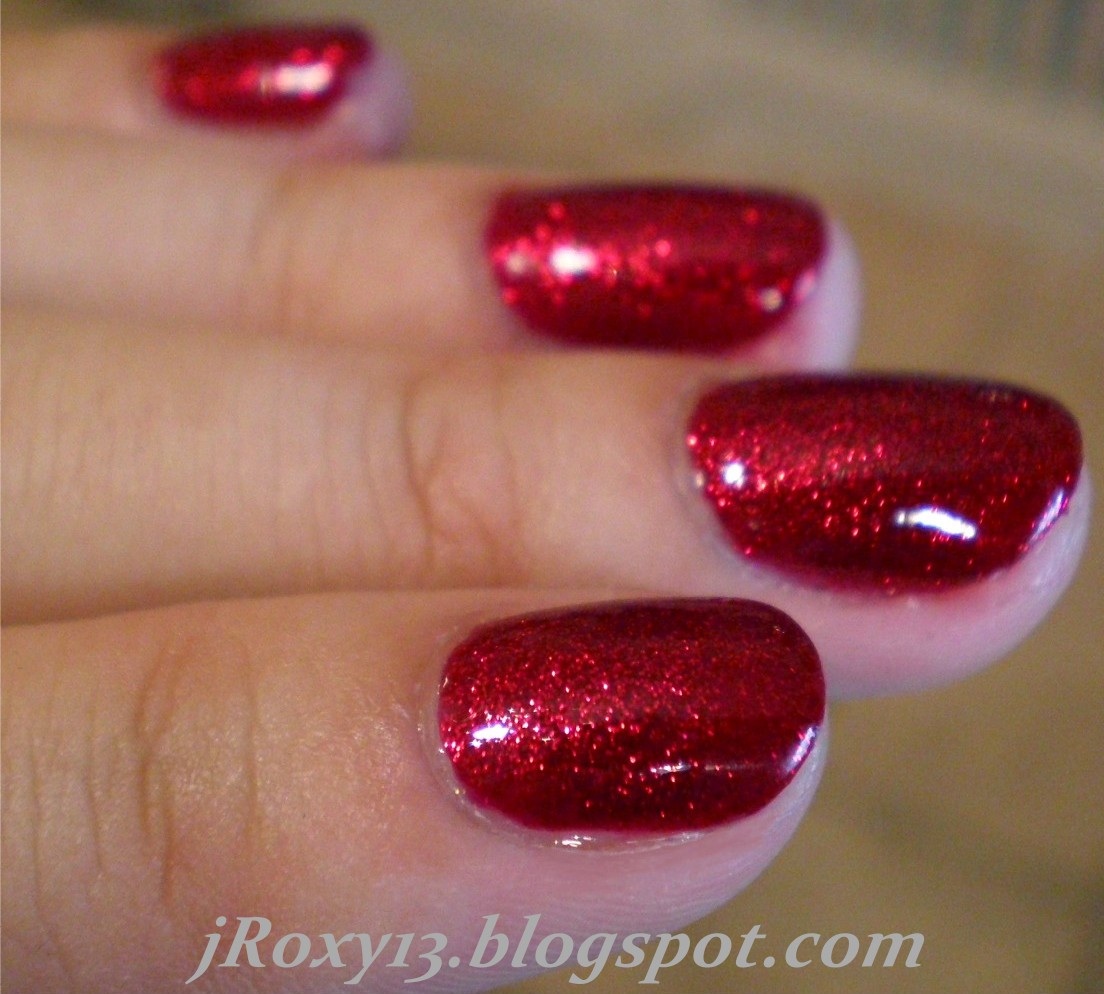 
Hmm, maybe. Well, when Wizard of Ooh Ahz was re-released this winter, I had been built up to a lather due to the insane pre-buzz and pictures.  Sadly, the line has not lived up to the old formula in my eyes, but it induced me to buy the whole collection for posterity.  As you might be able to see, Star Spangled and Ruby Pumps are very similar.  These pictures were taken during the same session under the same conditions.  Both polishes required 2 coats, but attained more depth with three and had the same application.  They are a bit different, but unless it was brought to your attention, I doubt even the most discerning polish fiends would know which one they were looking at with certainty.  I took some comparison pictures for those who have to know (like me). 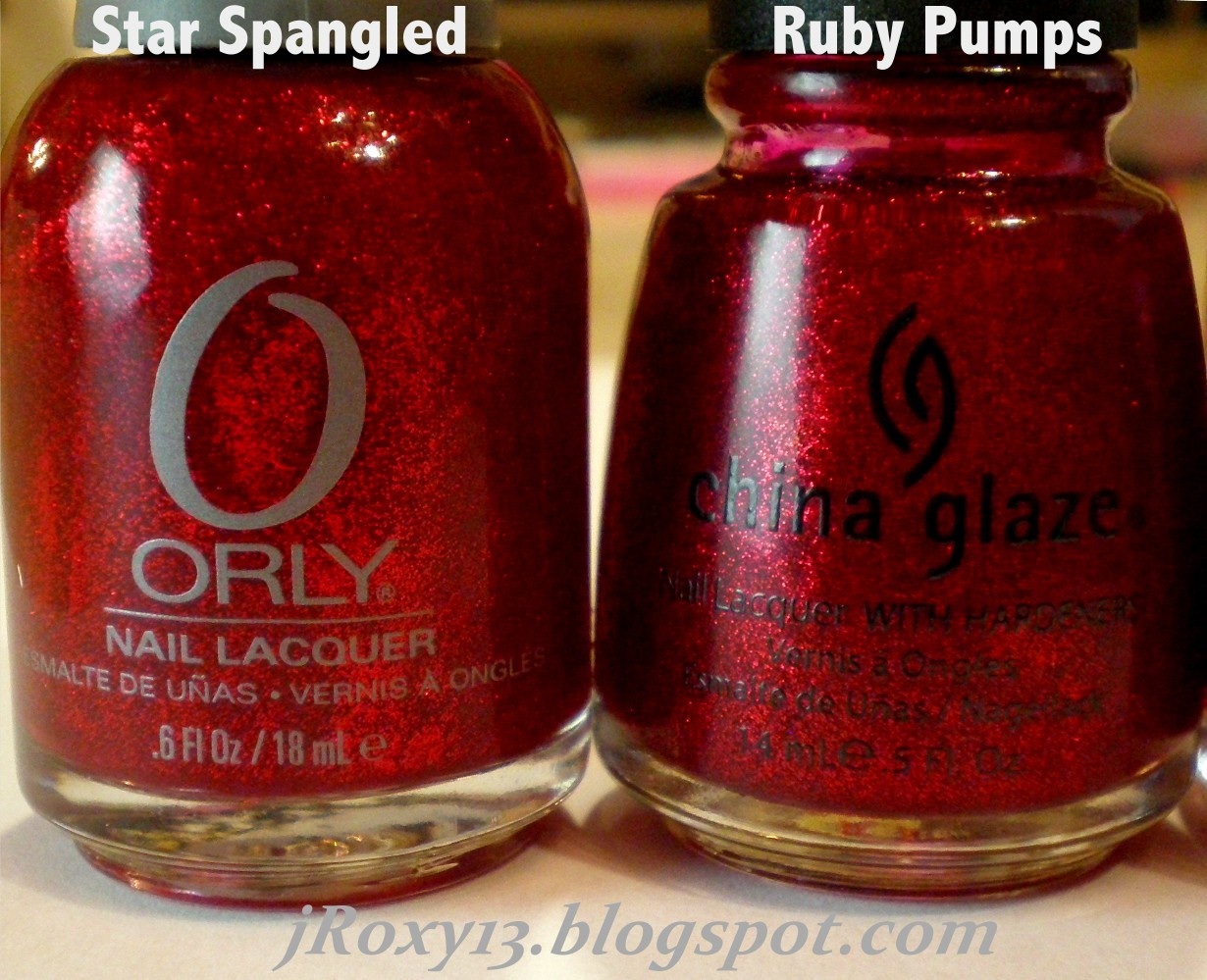 
Here, you can see some differences. SS's glitter is a bit finer and seems to have a slightly warmer tint than RP's.  Yeah, that's about it. 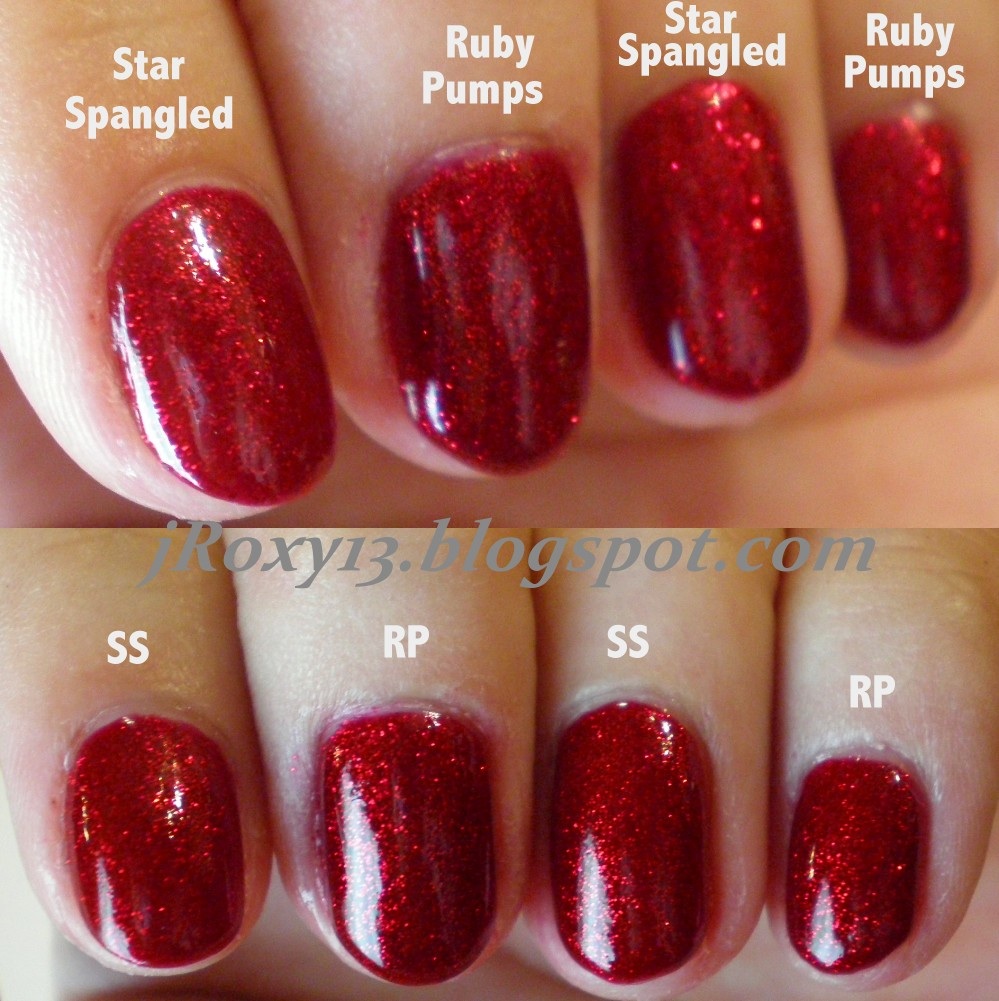 
Here, again, there are slight differences between the polishes.  The base color of these polishes are the same exact shade of rose-y red that deepens to a true red after two coats; it is the glitter that changes their appearance.  SS's glitter is slightly more yellow tinged than RP, which is a bit cooler.  The glitter for SS is ever so slightly finer than that of RP; more importantly, it is more uniform or homogenous, whereas RP's glitter has a bit of variation, that gives it a little more depth on the nail.  If you look at the pinky nail comparison of Ruby Pumps to Star Spangled, that is more accurate in showing how similar they are - my middle finger is double-jointed so I can't get it to lie in the exact same direction as my other fingers and it is inclined a little more, showing off a different reflection.  Honestly, I don't think you need both of these polishes, but if you do have them I suppose you can comfort yourself  with the fact that they are not identical twins, more fraternal (but let's be honest, the Mary Kate & Ashley kind of fraternal).  Now on to the third, and my favorite, ruby red polish! 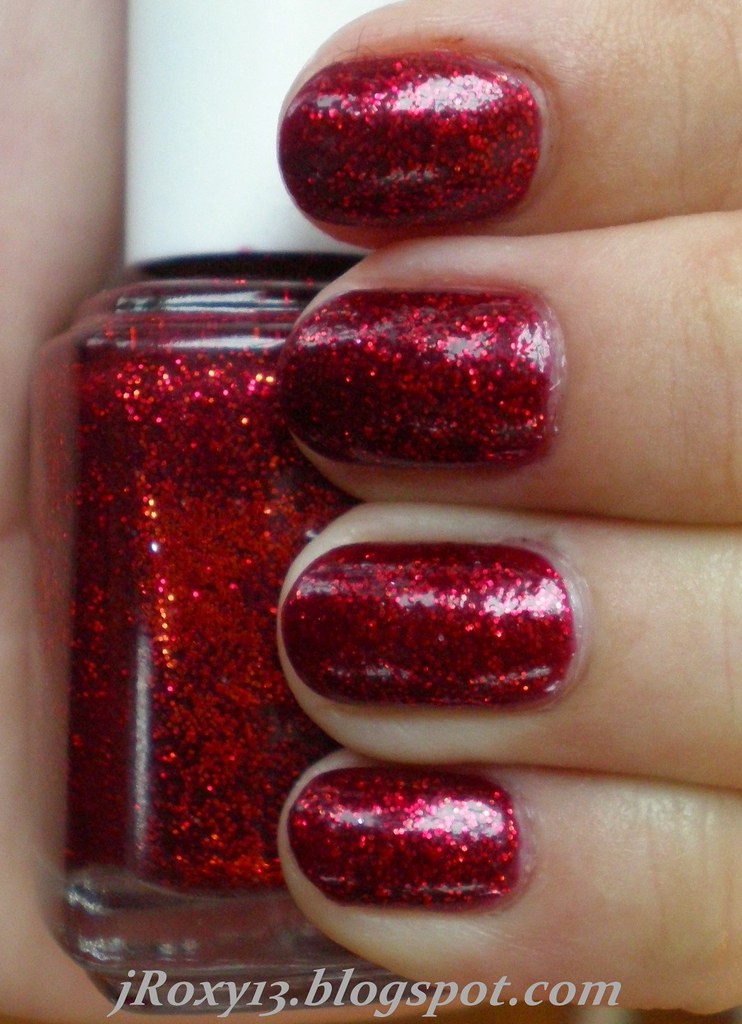 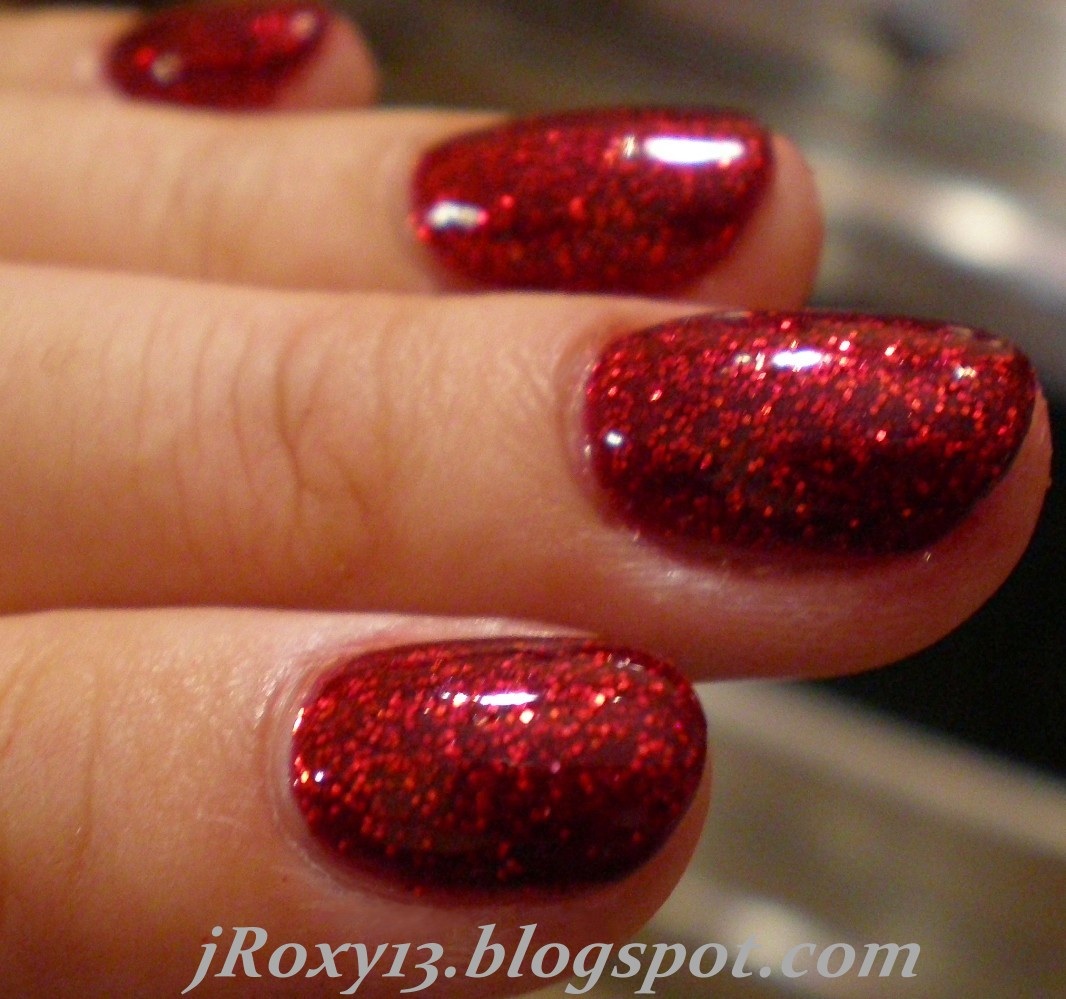 Essie in Ruby Slippers from ? 2003 collection (if you know, please tell me in the comments!)


I have never seen why Ruby Pumps gets all the love, when Essie in Ruby Slippers is it's blingier, more bangin' sister.  To me, Ruby Slippers is Nicky Hilton to Ruby Pumps' Paris - she is actually prettier and cooler, but Paris gets all the press!  I found this one first and it is my Holy Grail ruby red polish, so I never bothered looking for another.  Now I have two others and let's face it: they're nice, but they're really just extraneous compared to this gorgeous lady!  Okay, I might be biased because I am a huge glitter hound - wait until you see how crazy I went with the Fall 2009 China Glaze "Glitters, Shimmers & Cremes" collection - but it's so so so so pretty!  In the first picture it looks a little bumpy, but as you can see in the second picture, it's glass smooth (one coat of Seche Vite!), it's just the reflection of that insane amount of glitter.  Like the others, this baby only needs two coats, but three gives it more depth.  This one is obviously different from the other two; it has a deeper almost vampy red jelly base and the glitter is larger and less similar to the base color - a bright orange-y red that gives this polish a gold flash at times and for some reason, occasionally I get a blue-purple flash.  Love it!  (Sidebar: Why does Essie do these amazing colors and then discontinue them, while she produces yet another sheer pink and red creme each season?  I found it so bizarre when Scrangie did her interview with Essie, that she said she wears sheer combos on her hands year-round - Mademoiselle and Ballet Slippers are her favorite.  Why start your own polish line because salon color's were "limiting" and then confine yourself to such conservative colors?)  I also did Ruby Slippers matte, which brings the glitter to even more prominence: 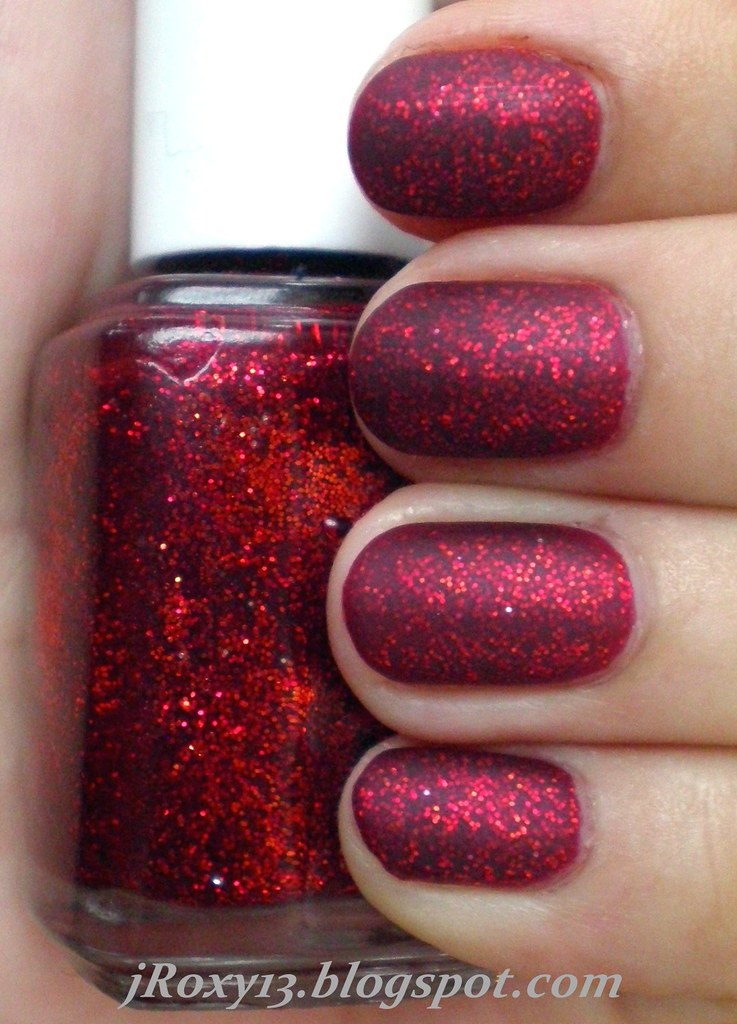 Essie in Ruby Slippers with Essie Matte About You


Just for the sake of being complete, I did comparisons of all three, but you don't really need them - they're just extra pretty. 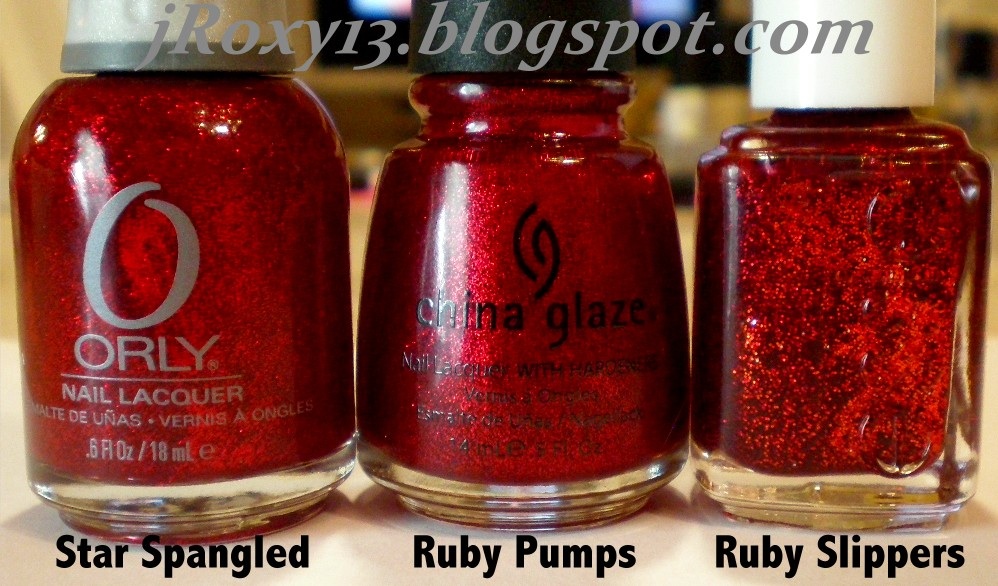 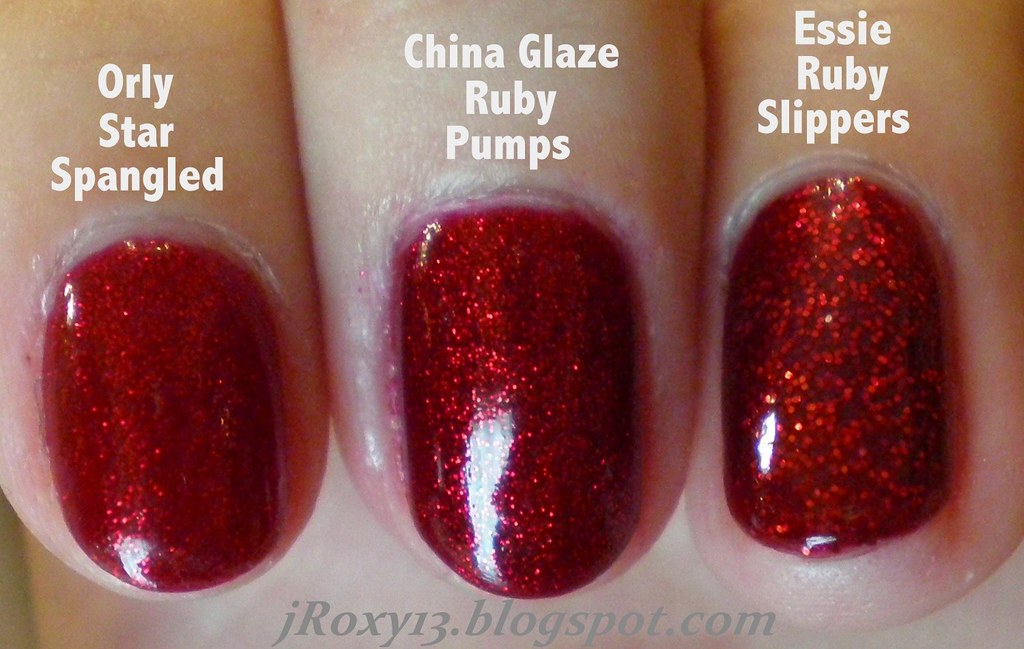 
I also did a ruby red combo using Lynnderella in Ruby Red Ruby, Deborah Lippmann in Supermodel, and Hard Candy in Breakup here.

I hope you guys enjoyed this!  I've got my BBC pictures all taken, I just need to edit them and write up my posts.  This afternoon I saw Nine, which was better than i thought it would be from the reviews; I really enjoyed it.  (Also, I have a girl crush on Marion Cotillard, who is just luminous and has a really nice voice - all the women in the movie are gorgeous!)  While I was at the mall, I picked up Claire's in Dreamcatcher, which the NB has discovered is a pretty close match to Chanel in Jade.  I'm going to do a mint green comparison soon, including those two polishes.  I also picked up an extra and I have a couple other polishes that are dupes (Finger Paints Icy Iris, for one), so I'm thinking of doing a fun contest soon - stay tuned for more on this!  I'd love to hear comments from you guys: let me know how I'm doing, if you're enjoying my posts, what you'd like to see in the future, or just say, "Hi!"  Tonight I'm going to watch Fellini's 8 1/2 (which inspired Nine and also the name for my old friend's dog) and finish off the bourbon pumpkin cheesecake my mom made for Christmas.  I suspect other's might be having a similar Post-Christmas night; if so, may it be as delicious as mine is sure to be!
Email Post
Labels: Bottle pictures China Glaze Comparisons Essie Glitter Jelly Matte Orly Red Ruby Red 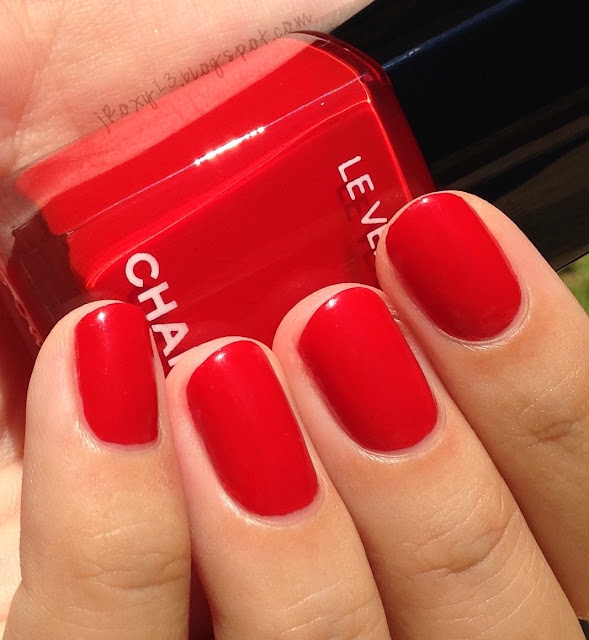